Enola Holmes and the Elegant Escapade by Nancy Springer 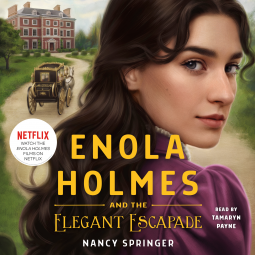 I had read the first few books in the series shelved with juvenile fiction in our library. Enola Holmes and the Elegant Escapade, #8 in the series, is decidedly more mature in content and I would suggest it for 14 and above. As Enola has aged within the series, she has continues to buck the conventional expectations for young ladies of the time.
The Elegant Escapade involves assisting a friend (who was the subject of previous books that I had not read). I had no difficulty following the story and found it enjoyable as a stand-alone mystery.
Enola's resourcefulness and ability to outwit not only her enemies but occasionally her brother, Sherlock makes her a protagonist of particular merit.  As Enola seeks to liberate her friend imprisoned within her own home, readers will be rooting for her emancipation. Through many twists and turns throughout the city and in and out of various disguises, Enola proves herself to be the capable young woman her mother believed her to be.
Author Nancy Springer has created a spunky, determined heroine who boldly puts her own life on the line to come to a friend's aid. In the world of detection crowded with men, Enola offers a fresh take on the genre and provides a model of ingenuity and independence for young female readers. Hopefully, Springer will continue the adventures of Enola Holmes, with many more future mysteries to solve.
I reviewed the audiobook narrated by Tamaryn Payne who did a stellar job. I highly recommend the audiobook! With a second Netflix production of Enola Holmes in the works, the series' popularity cannot help but escalate.

Disclaimer: I received a free digital copy of the audiobook, Enola Holmes and the Elegant Escapade from NetGalley for the purpose of review. No other compensation was received.