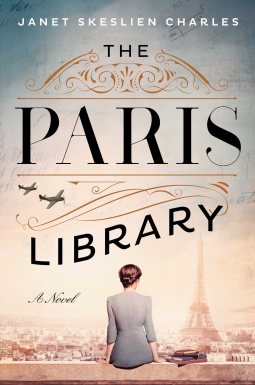 The Paris Library is based upon true events that took place during WWII. The main focus is the American Library in Paris and those who were employed or volunteered there. Some characters were based on real staff. Central to the story is Odile who has finally secured her dream job of working at The American Library.  Through her eyes, readers meet a wide and varied cast of supporting characters, each of whom offers a lens through which the events and effects of the war as it reached Paris can be viewed.  But that setting is only part of the story.
The author, Janet Skeslien Charles, has woven two stories within the book. Readers are offered parallel threads that intersect: Odile's story that begins in 1939, Paris, and Lily's story set in 1983, Montana.  Within the past are mysteries that are slowly revealed.  The reality of war and the way it slowly turned people against one another is masterfully portrayed. No one is free from grief as brothers, sons, neighbors are wounded or killed in war.
Fast forward to 1983 and Lily and Odile are neighbor. Lily, a plucky high school girl manages to break through Odile's cold, reserved exterior. As Lily faces normal teen struggles, Odile offers a listening ear and sage advice.  When Lily faces a dark trial, Odile becomes the anchor to which Lily ties her soul. And then, in a foolish act of teen curiosity, Lily discovers what she believes to be a dark and shameful secret from Odile's past. Can their friendship be restored or will they each remain stubbornly enmeshed in their own pain?
The book tells a compelling story and the dual story lines reveal how various characters wage their own personal war. The book shows the good, bad and ugly that often dwells within each one of us.  Part of the good was the message that when we learn to share our pain with another person, a friendship can grow that will facilitate healing and growth.  The bad included what I considered moral failings in  Odile's younger days. I wish references could have been made without providing detailed descriptions of those lapses. Compared to the average offering on television and film, the book's content would be considered mild, but it's worth noting that I would not recommend this book for any but an adult audience. And the ugly represents the realization that we are all capable of hatred and despicable acts of betrayal.  Learning how to forgive and seek restoration is perhaps the hardest war of all, but so worth winning.

You can pre-order the book today and it will be shipped to you upon its release on February 2, 2021. In the meantime, check out the author's website for a fascinating look at some of the real lives of characters in the book.  The author has scanned images of photographs, reports and newspaper clippings, some of which detail the services that the American Library in Paris performed.

Disclaimer: I received a digital copy of The Paris Library through NetGalley for the purpose of review. No other compensation was received.