The Dog Who Lost His Bark 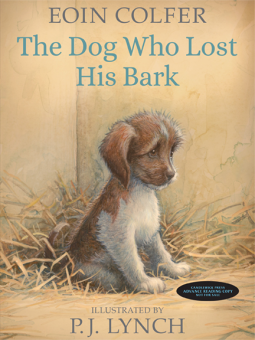 While I've not read anything previously by Eoin Colfer, I am familiar with his works so this book for younger readers was a bit of a surprise to me. I was more familiar with P. J. Lynch as the illustrator of one of my favorite Christmas books. The cover alone is enough to enchant youngsters.

And then I opened the book and was immediately ANNOYED that random words were in CAPITAL letters. I was not SURE if this was just a technique to INDICATE that it was the dog talking? Or was it JUST to try to be unique and DIFFERENT?  But in today's world of ALL-CAP SHOUTING, I have to say the format drove me CRAZY.  I'll stop now as I'm giving myself a headache. That was Strike #1.


Story opens with a pupply getting chosen right before Christmas but the new owners are the family from below. Dad with his explosive temper slams on the box the dog is hidden inside, the boy expects the dog to understand "sit" immediately and when he doesn't, the boy responds with STUPIDDOG (more CAPS!!). That lovely name is repeated over and over (why would I want to introduce my child to name calling?!). More violence when the puppy has an accident and the next thing you know the dog is being dumped down a hill by the side of the road. So after making it through the first two chapters, I was seriously wondering what parent in their right mind would consider this wholesome reading for a child?  Strike #2.

Time passes and readers learn that puppy has lost his bark. Another family comes along looking for a pet at the shelter.  The owner cautions the family that the puppy was abused and will need lots of patience and love. Patrick is suprised that his mom is even letting him get a pet since his Dad (away on a musical tour) is so allergic to pets. At this point, I had my suspicions where this story may be heading.

I did enjoy Patrick's efforts to help the puppy trust people again. He poured his heart and soul into that puppy and discovered a surprising form of therapy that really made a difference. Those chapters about their growing friendship were truly heartwarming and I had hopes for the book until it turns out that Patrick's parents are getting a divorce. Over the summer Patrick has texted back and forth with his Dad but he hasn't had a chance to talk with him face to face.

I felt like the book spent so much time describing the puppy's recovery and the book could have also offered so much help and encouragement for kids going through a divorce. But things end abruptly and Patrick hasn't seen or talked to his dad face to face. The book could have ended with a strong message to children that they are still loved by both parents, etc. Kind of feels like the reader just got dumped at the side of the road.  That was Strike #3.

The only redeeming thing about the book were the amazing illustrations by P. J. Lynch.  Charcoal sketches were liberally spread throughout the book. The amount of illustrations would normally make this a perfect book for readers transitioning from picture books to chapter books. But given the content,  I would reserve this for either a read aloud (with some discussion with a parent) or as an option for middle grade struggling readers.

Disclaimer: I received a free digital copy from NetGalley for the purpose of review. No other compensation was received.
at June 26, 2019