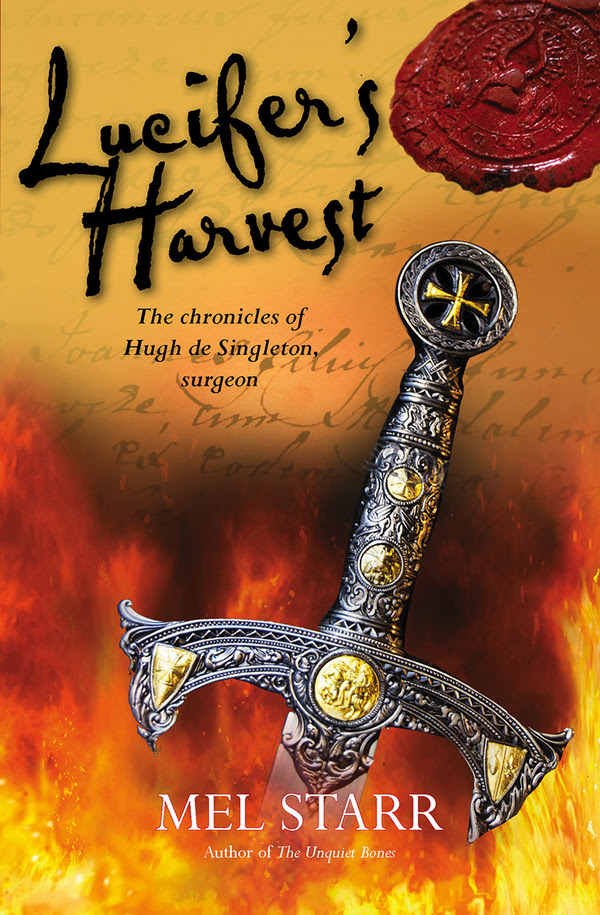 Readers will enjoy the acquaintance of Hugh de Singleton whether introduced from the first novel, or starting from the middle of the series. Lucifer's Harvest, is one of the shorter mysteries and would be a quick and efficient way to "sample" the series. I suspect it will whet one's appetite for the whole series.

Set in medieval times, it's fascinating to learn of historical details and locations (and even medical practices of the time), while enjoying the wit and wisdom of the surgeon (and bailiff), Hugh. In this installment, Hugh crosses paths with Sir Simon, a man who has held a grudge since he lost the hand of Kate to Hugh.

When Sir Simon comes to an untimely end, Hugh is the obvious prime suspect. So while he is providing surgical support to wounded soldiers, Hugh must try to clear his name and find the guilty party.

I enjoy how Starr gives the readers a front row seat in the theatre of Hugh's mind. Knowing his plans and being party to his inner mental calculations, makes the reader feel as if he is not only in the story, but assisting with the investigations.

Each book in the series adds a little more dimension to the cast of characters. Lucifer's Harvest is a great read during the winter holidays and would make an especially great gift for any mystery enthusiast! I hope that Starr will continue chronicling the investigative life of Hugh de Singleton.

Disclaimer: I received a copy of Lucifer's Harvest from Kregel Publications for the purpose of review. No other compensation was received.
at December 15, 2016