Bugs in the Kitchen

Games are a fabulous and interactive way to make memories with friends and family. With six kids, we have a lot of games at our house. I've learned in my two decades of buying games, that Ravensburger is one of the few companies whose products stand the test of time for fun and durability.  I was curious whether the new game, Bugs in the Kitchen would measure up to my expectations.

I enlisted the help of some young game testers (my 12 year old son as well as 10 and 8 year old daughters) to test drive Bugs in the Kitchen.  When the box arrived you should have seen the reception--practically jumping up and down.  The game proved to be an excellent bribe for my kids to finish their school that day!

After a grueling wait, we opened the box and drank in the sight of these beautiful parts (sorry I couldn't share that wonderful new game smell as well): 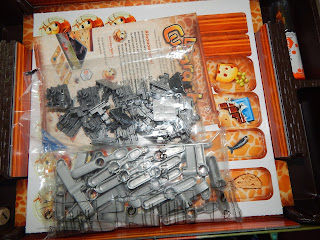 We immediately read over the directions for assembly (printed in several languages--especially fun if you have bilingual children).  My willing helpers easily got the hang of popping in these plastic pieces that sit underneath the game board. Notice the die sitting in the box. Options on the die are fork, spoon, knife or question mark: 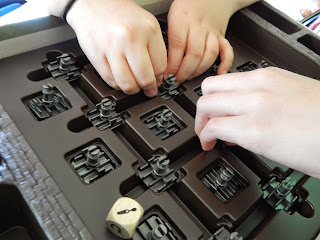 Next step was popping out the little holes through which the bottom anchors would extend (back of board is shown). 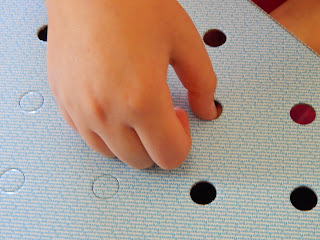 The game board nestled very nicely over the anchors.  We then followed the illustrated example in the directions for snapping the plastic silverware on the game board (can you see those cute little forks, knives, and spoons?). 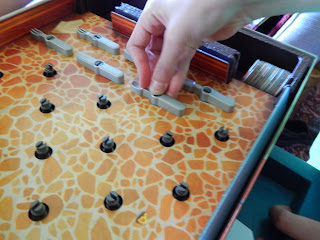 I loved how the box perfectly houses the game board--this is game design at its best.  Once assembled, the game board is fixed within the box. {I have to note that Ravensburger makes the most incredibly durable box--very important with kids!}

The piece de rèsistance of the whole game is the HEXbug Nano. Comes all ready to go with a battery: 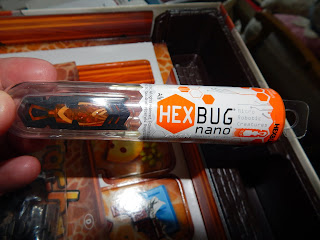 Next we had to configure the utensils into one of the 4 possible starting positions and put the bug in the center. Here's one of the options: 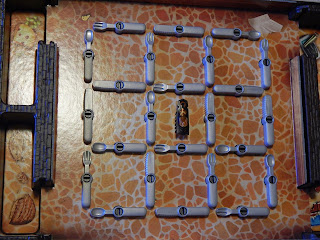 Turn that bug on and then the first player rolls the die and if a utensil is rolled (fork, spoon, or knife), the corresponding utensil can be moved on the game board. If a question mark is rolled, player can move the utensil of their choice. The object of the game is move the utensils in such a way as to allow the bug to land in your trough area. When a bug falls into one of the troughs, the player gets one bug token.

This player then selects the starting position for the utensils and puts bug back in the center. They also get to roll first for this round.  The first person to acquire 5 tokens, wins the game.  We enjoyed just continuing the game to find out who would be second, third and fourth.  If you have less than 4 players (or want to continue to play after someone leaves the game), there are cardboard pieces to block off that player's trough so the bug can't fall in that one.

The box gives an age range from 6-99, but I feel that with supervision, even younger children would enjoy playing. Perhaps pair up a younger player with an older one. The bugs have a mind of their own which helps even the playing field among players. Players may end up moving a utensil to clear the path to their own trough or to block the path to someone else's.

After the initial set up (which took less than 5 minutes), there is next to no preparation each time the game is played. Basically open the box, configure the utensils into starting position, turn on the bug and let the fun begin.  Life with kids can get crazy busy and it's nice to have a game that you can grab and play when you don't have lots of time (most rounds take only 15-20 minutes).  But don't be surprised if kids want to play multiple rounds!

The game would also be great for solitary play for a child to set up a maze and just watch the nano bug go. For the research minded, kids could plot a graph and time their bug for how quickly it falls into a given trough.  Or use multiple bugs and see which falls into a trough first.

I think this type of game is an excellent option for holding the attention of more active kids. With no reading or math skills involved, players of all ages and abilities can play together. This game could be a wonderful classroom game in elementary and special education classrooms. Just be warned that excitement and noise levels may run a little high!

We happened to own several other nano bugs so we decided to try the game with additional bugs. We first tried 4 bugs, then 8 and finally 12.  Expanding the number of bugs involved figuring out new configurations for the game board (an excellent exercise in spatial logic).

Best of all, game cleans up in less than a minute. The game exceeded my expectations by introducing a fun product (nano bug) with a board game that varied ages can easily play and enjoy. This game was definitely an all around winner at our house! 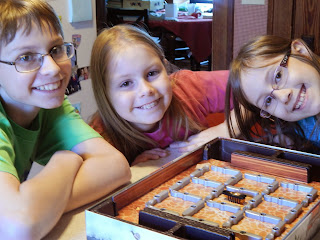 Once again, Ravensburger has produced a high quality, visually stimulating and durably constructed game that will not disappoint!  And in case you ever misplace the directions, Ravensburger has you covered with rules you can download from their website--they've thought of everything!

Disclaimer: I received La Cucaracha (international version of Bugs in the Kitchen) from Ravensburger as part of their product testing program. No other compensation was received.
at May 25, 2015