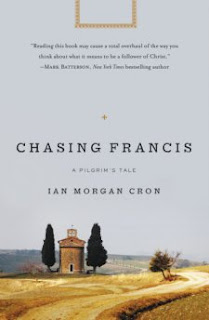 Chase is the fairly young pastor of a large church on the east coast.  He is single and living the rather charmed life of  pat answers and an unwavering faith.  Until the death of a child in his church leaves him facing some serious doubts about his faith. Chase and his struggles echo what many people feel and may be too ashamed to admit.  Everyone goes through ups and downs in their faith.   The added challenge for Chase, however, is that he hit bottom in the middle of a service one Sunday, in front of his well-populated church.  Professional suicide for sure.

The church leadership wastes no time in calling a meeting which concludes with the insistence that Chase take a sabbatical.   Seemed rather abrupt but he takes them up on it and decides it's time to call his uncle, Kenny, who lives in Italy for advice.  He invites Chase to visit and mentions he has someone for Chase to meet.

Turns out the "someone" is none other than St. Frances of Assissi who undoubtedly left a very deep impression on the area and its inhabitants.  So as Chase settles into the monastery where his uncle resides, he decides to keep a journal. Sort of. Actually more like letters to Francis which struck me as a bit odd. Admittedly an interesting literary device but why wouldn't a clergy journal thoughts and prayers to the Author of his faith, instead of an emissary of that faith?

As Chase spends time with his uncle in Italy, they travel to various places that represented significant scenes in the saint's life.  I really enjoyed the historical component and the descriptions of the places and events that made them noteworthy.

While overseas, Chase receives some communication from a parishioner named Maggie (the mother of the girl who died). She ends up showing up for part of Chase's travels and provides an interesting contrast to Chase's "put together" outward perfection.  He's a mess on the inside;  Maggie is still grappling with the mess her life was before Christ.

Not sure if it's just a European worldview, but I felt as though Christian license and liberty were accepted as part of the "enlightened" believer.  I was surprised that a monk would smoke.   And there was definitely a lot of feasting and libations.  Not sure if that was just for the sake of his visiting nephew or a whim that monks hit the road and wine and dine whenever the fancy hits.  Just seemed to be at odds with the life of a monk.

On one evening out with Maggie, she was telling loud, inappropriate jokes: "Maggie entertained us by telling off-color jokes in such a loud voice that people at the surrounding tables were laughing along with us."  Seemed a rather odd scene.  I would assume that time spent in a monastery would naturally lead one's thoughts to sanctification and greater strides toward personal holiness--a call that Christ clearly makes to his followers.  Not an abandonment of it.

On the spiritual level, the book was a disappointment.  Seemed like a very liberal view of the Gospel and its expectations.  In particular, it seemed as though St. Frances' life was being interpreted through the lens of a more modern form of Christianity than what would have been practiced during his life.  One particular quote was particularly troubling. One of the monks, Bernard, is speaking,

"When sin entered the world, it ruptured the friendship we'd once had with God, with other people, with ourselves, with our bodies, and with the environment. Our spiritual, social, psychological, physical and ecological relationships were fractured. Francis preached a gospel that was holistic. He wanted his hearers to have all those torn dimensions of their lives repaired. Conversion was about being reconciled and restored in every aspect of life. For Francis, that could only happen through the blood of Jesus, living by the words of Scripture and conforming our lives to the gospel."


I'm sorry but those words of Bernard's just do not line up with Scripture.  The fall had nothing to do with some ecological relationship--the idea seems utterly ridiculous.  He preached a "holistic" gospel?  Would love to see any tangible evidence of that (considering the concept wasn't even around back then).

The quote from Bernard was page 148 out of 214 and I was sorely tempted to chuck the book at that point.  I even read the passage out loud to my husband and he wondered who the publisher was (and was very surprised to learn it was Zondervan).

Kenny once told Chase in talking about different faiths, "...no one tradition has a corner on the faith market. Sharing the wisdom each of our traditions brings to the table, will create more well-rounded Christians."  Sorry, I just don't buy that either.

Eventually Chase receives word that he'd better return or lose his job. He and Maggie frantically work on a proposal for the new direction the church should take.  Would his congregation follow Chase and his new vision or would Chase be finding a new church?   I have to say by the end, I hardly cared.  It seemed as if the message was that when you go out looking for answers, you'll find them in the world through the wisdom of man and his social gospel.

I think the book would be better titled, Chasing Mysticism.  Not a journey I'm prepared to embrace.  Nor a book I can recommend as a Christian.

For those who enjoy picking apart a book and analyzing Scriptural misinterpretation, you can purchase this book directly from Zondervan or from one of the following retailers:

Disclaimer: I received a free copy of Chasing Francis from Thomas Nelson's Book Sneeze program for the purpose of review. No other compensation was received.