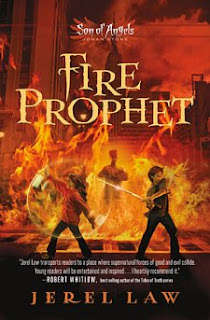 Jonah and Eliza Stone return in the second book in the Son of Angels series by author and pastor, Jerel Law.   It's been a year since their last adventure and they are in New York with their parents and younger brother, Jeremiah.  After meeting a prophetic street preacher their life gets pretty exciting.

Faced by bullies at school (influenced by demons in this case), Jonah gets escorted home with his siblings only to find out that all quarterlings (descendants of nephilim in the Bible) are under attack and will need to be taken to a safe house.  After frantically packing, the family is on their way. With some close calls, they make it to where the kids are left--a convent in New York. For the first time, Eliza and Jonah meet other children like themselves. And Jeremiah finally gets to find out how he has been gifted.

Dubbed "Angel School," the quarterlings are assisted in developing their spiritual gifts as well as learning the power of prayer and Scripture memory in defeating the enemies of God. The young people are being prepared for battle because Abaddon [Satan] has vowed to kill them all as well as their parents.

Sort of a celestial Spy Kids, Fire Prophet has pretty intense battle scenes; the demise of fallen angels was particularly gory in spots. I would caution parents to pre-read before giving to younger readers. Reading as a family would be my first recommendation so parents can help explain some of the spiritual aspects. For a read alone, I would suggest 12 and up.

One aspect that was a bit confusing was that some of the quarterlings had not yet received "Elohim" (as God was referred to in the book) as their Savior (which was evidenced by a lack of Elohim's glow while in the hidden realm). I personally do not believe that someone who has not been covered by Christ's blood can effectively engage in spiritual warfare with the enemy. Aside from that, I found the book an exciting read that will open young people's eyes to the reality of the angelic forces all around us.  The book would be a great introduction to studying more about the armor of God and how it protects us.

I thought the second book was much more engaging than the first and had a greater emphasis on spiritual disciplines such as prayer and meditation on Scripture.  You can visit the Jerel Law website to learn more about the author, story line and characters. You can also watch the book trailer.

Purchase your copy of Fire Prophet directly from Thomas Nelson or from one of the following retailers:

Disclaimer: I received a free copy of Fire Prophet from Thomas Nelson for the purpose of review. No other compensation was received.