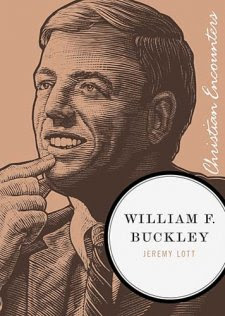 William F. Buckley by Jeremy Lott is part of a biographical series of books called, “Christian Encounters.” Due to the book’s small proportions (in size and pages—only 150 with endnotes), I had assumed the series was written for a juvenile audience. The content of the book, however, is decidedly written for an adult audience. The political discussions require a good understanding of the field and the vocabulary was a challenge in spots.

Lott does a good job of giving an overview of Buckley’s public life including the influences that shaped him as well as the shaping influence he had on the conservative movement in America. The book, while complimentary, was not an all-glowing review of the subject’s life. Lott honestly discussed some of Buckley’s missteps in politics.

While Buckley obviously held strong religious beliefs, I’m not sure I would have included this man in a series entitled, “Christian Encounters.” Being a man of conviction and faith is not the same as a man striving toward godliness—a trait that seemed sadly lacking in Buckley’s life. For example, Lott gives the story line for a spy series Buckley had written (sort of an American James Bond) whose main character lead a less than moral life.

Nonetheless, Buckley’s life is worth examination and Lott offers a valuable history, albeit brief, of conservatism in the second half of the 20th century—a topic which deserves a place in any serious study of American History. Excerpts from Buckley's TV show, Firing Line can be viewed on You Tube. Lott mentioned that The Hoover Institution assembled a collection of his programs that can be viewed here.

I learned a great deal about Buckley's career in media and politics. I liked the brevity of the book and am interested in reading some of Lott's other biographies in this series. In addition to Buckley, the following titles are currently available:

With three others to be released October 2010:

I believe several of the other titles within this series would be appropriate for middle or high school readers. Even the Buckley one could be done as a read aloud with some selective editing , (and explanation when needed), and also a useful reference for research.

Overall, I enjoyed the book and would recommend this title. You can read what others thought of this book at Book Sneeze.

Disclaimer: I received a copy of this book for the purpose for reviewing and blogging about it as part of Thomas Nelson's Book Sneeze program. The opinions expressed are my own and no other compensation was received.