The Whalebone Theatre by Joanna Quinn 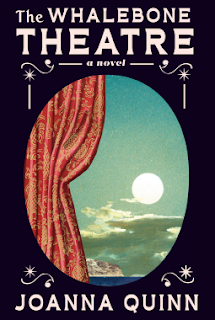 Reading this book felt like going on a vacation with numerous detours. Parts of the novel had very unique "flavors" that seemed almost disjointed (only loosely connected by the backdrop of a whalebone discovered on a nearby beach). The beginning was a very sad version of Cinderella with a forgotten stepchild being cast aside with the introduction of a young stepmother. A sibling is added to the mix  (with some question about its parentage) and then the husband predictably dies leaving the oldest child pretty much left to their own devices. Then ensues a second marriage for the stepmother as well as a third child to the household that has become the oddest makeup of a family that I have ever encountered.
The point of view in the book was also mercurial. It was as if the spotlight was focused on different characters at different times. Rosalind (the stepmother) was the first character in focus. And she was quite unlikeable (as was her husband, so I guess they deserved each other). Then we see more of the world through Cristabel's eyes but the reader did not have the advantage of knowing much of her backstory (only glimpses of the beginnings of her father's and mother's marriage but not much about her childhood prior to Rosalind's entrance in the story). One can't help feeling as if the whole cast of characters are merely actors on the stage of life--coming and going at various points in the story with no true heart connection to one another. Merely reciting memorized lines.
A rather Bohemian cast of characters gets mixed into Cristobel's life that offered a sad glimpse of debauchery  (excessive drinking, smoking and loose morals). The acceptance of having a wife as well as mistress in their non-traditional family, was quite bizarre. Then the story skips ahead and now the characters are affected by war. With every change of time and place, I grew more and more confused and less invested in their futures. After wading through a bit over half of the book, I ceased caring about any of them. I guess that may be a fitting metaphor from the book: as the whalebone weathered over time and the flesh was picked clean, I felt there was less substance to the story. Too many pages with too little to show for the effort.
Perhaps my old-fashioned ideals just didn't quite gel with the drama unfolding. Sometimes it just isn't worth beating a dead horse whale to find out how things will end. This title was just too weird and depressing for my taste.
Disclaimer: I received a free digital copy of The Whalebone Theatre from NetGalley for the purpose of review. No other compensation was received.
at July 10, 2022

Agnes and the Sheep

Meet Agnes: a dog who knows and appreciates the concept of cozy! Agnes is a helpful, hard-working farm dog who also enjoys closing out eac... 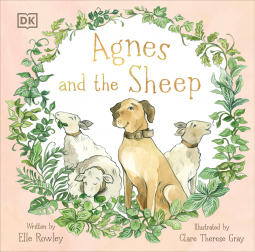