The Complete Mirrored Sword: Part One and Two 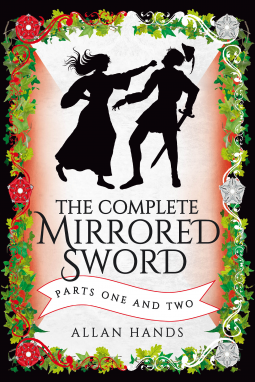 From the Publisher's Summary:

MIRRORED SWORD, a comedy as black as the Plague, as turbulent as the Wars of the Roses (a fifteenth century dynastic struggle for control of the English throne). She is an aspiring painter and devoted Yorkist. He is the legendary but ageing Beast of Ferrybridge – a Lancastrian stalwart! Rebellion in Lincolnshire throws them together, the Yorkist king keeps them together, and thus they must work out their destinies and England’s, in an epic story that combines laughter and tears, romance and adventure, history and make-believe, high art and vulgar entertainment: a medieval banquet, loaded with surprises, colourful characters and poetic justice.

I had assumed the book was young adult but it was quickly evident that this was much more mature in nature. After reading the first chapter I already hated the spoiled, headstrong female main character. After several rather ribald jokes, I skim read for a few more chapters but I just could not stomach the predatory nature of the men, and the promiscuity that was assumed to be the natural way of things. King Edward's indiscretions were reported in graphic detail and as though a perfectly normal behavior for royals and reading of young women wanting to be his next mistress was utterly disgusting.
The depiction of women as objects to be possessed (and as though they enjoyed being possessed) was too nauseating to wade through. Perhaps there will be some justice meted out at the end, but I prefer not to have to wade through a literary sewer to get there.
Disclaimer: I received a free digital copy of The Complete Mirrored Sword from NetGalley for the purpose of review. No other compensation was received.
at April 03, 2022