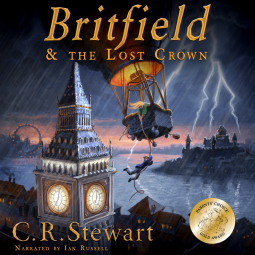 C.R. Stewart has created a twist on the Dickensian tale of Oliver Twist. The male protagonist, Tom, has a younger female sidekick over which he feels a protective instinct. Suffering through the daily cruelty and persecution knits the orphans together. Prior attempts at running away have been met with swift and decisive punishment. The caretakers of the orphanage are desparate to protect their lucrative business of hoodwinking the government and embezzling the funds that were supposed to clothe and feed the children. Thankfully, a kind cook occasionaly smuggled in fresh fruit, offering a welcome change from the watered down gruel on the menu. The prospect of reading a book stolen from the caretaker's home offered small comfort (the herculean feat of procuring said book was a challenge spread out among the orphans).

After sneaking onto the roof one night and subsequently caught, Tom narrowly escaped only to learn that Sarah had not been so lucky and was locked into the attic for punishment. After the caretaker tried to blackmail Tom into spying on fellow orphans, he decided he'd had enough and actively sought the means to escape Weatherly forever. With the help of the entire orphanage, Tom made his daring escape. Then ensues a chase like no other by varied and sometimes unusual means. They are doggedly pursued by not only henchmen of the orphanage, but also by a detective who has been outsmarted only once in his prestigous career.

Tom and Sarah are spurred on by the hope of finally being free to live their own life. Readers will go from hope to dismay as time and time again they are thwarted by ever-increasing enemies. Thankfully, they find a few kind strangers who help them--often risking their own lives. Never quite sure who to trust, Tom and Sarah find that the world is much more sinister than they imagined.  Parts of the story conclude nicely while some elements I assume will be tied up in future installments. I highly recommend the book as a modern take on Oliver Twist and eagerly anticipate a sequel. Grab your copy today through Amazon (affiliate link).

Disclaimer: I received a free digital copy of the audiobook, Britfield & The Lost Crown from NetGalley for the purpose of review. No other compensation was received.

Thank you very much for your kind words & terrific review! I am so encouraged! I am currently in the editing phase for Book II, Britfield & The Rise of the Lion, and it is set to be released in March 2021. I think that you are going to love it!

Just an interesting note: The narrator of Britfield & The Lost Crown, Ian Russell, just won Best Male Voiceover Artis of the Year 2020 in the One Voice Awards! AMAZING!

Thank you, again for your support!
C. R. Stewart

Thanks so much for your comment. Very happy for Ian Russell--he was an excellent choice for narrator! Will look forward to the second book's release!

I am buying this book - it sounds terrific!

Hope you enjoy it as much as I did! Looking forward to more in the series!