The Black Midnight by Kathleen Y'Barbo 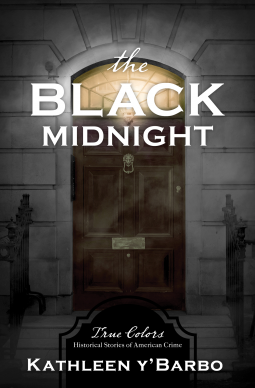 With the popularity of so much true crime programming on cable and network TV, it's no surprise that a series on historical crimes in America would be a topic of interest.  The Black Midnight examines the potential connection between a series of murders in Austin, Texas and the later murders committed by Jack the Ripper in Englad. Knowing that the crimes by Ripper in England were never solved, the reader knows there will not be a final resolution to the book.

Readers who relish books detailing history and the day to day lives of people in the past with historical tidbits sprinkled throughout, may not mind the lack of resolution. I learned some about the famed Pinkerton detectives and the inclusion of a female detective was an interesting one (although not sure  how realistic). I also learned about some of the popular theories about the perpetrator(s)--jury is still out on whether the same person was resonsible for crimes in US and England during that time.

There was a bit of romantic thread which felt a bit predictable and Harlequin-like (not my favorite genre). Beyond that, the book did offer an interesting perspective on policing methods in the latter 1800's as well as a timeline for some of the crimes.  The book may prompt some readers to do a bit more research into the crimes. Given the mature nature of the book and crimes described, I would recommend it for adult audiences.  I was grateful the relationships stayed moral and there was no foul language and the violence was not gratuitous (the crimes, however, were quite grisly so those with weak stomachs be forewarned).

If true crime interests you, go grab your copy on Amazon today! (Note: this is an affiliate link and provides a few pennies to me--at no cost to you).

Disclaimer: I received a digital copy of The Black Midnight from NetGalley for the purpose of review. No other compensation was received.