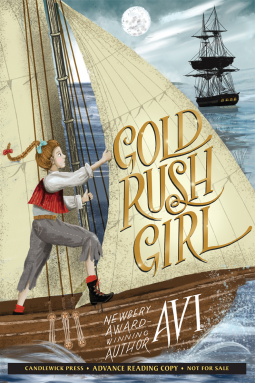 Gold Fever has reached Victoria and her family on the East coast. Father and Jacob were to go first and mother and Victoria would follow. But she could not stomach the thought of staying behind with a controlling aunt wanting her to be more "ladylike."
Victoria begins to plot a way to sneak aboard the ship and stay hidden until out to sea. But she soon realizes it would be cruel to leave without telling her mother so tells her all about the plan. Gratefully, her mother sees the wisdom of going along to be a help in caring for her younger brother and a support to her father in keeping house. So begins a host of new experiences in the pursuit of gold.
After a long and gruelling voyage, they arrive at the coast of California but have to wait until weather conditions permit a safe landing. Once on land again, California turns out to be a far cry from the luxury Victoria once took for granted. She soon discovers that she won't be accompanying her father but instead left solely in charge of her brother. No easy task to try to keep him out of trouble and scrounge up work to help pay for food and other necessities while her father is away.
As the days turn into weeks and then months, Victoria and Jacob face challenges they never expected and dangers that threatened their very existence. Avi keeps readers in suspense wondering if they will ever be reunited as a family again.
Gold Rush Girl is an exciting story that offers an interesting and realistic picture of the time period and the sacrifices families made to try to better their lives. Victoria and readers alike will learn that some things are more important than gold.

Disclaimer: I received a free digital copy of Gold Rush Girl from NetGalley for the purpose of review. No other compensation was received and the opinions expressed are my own.
at May 12, 2020