Mission to the Bottom of the Sea 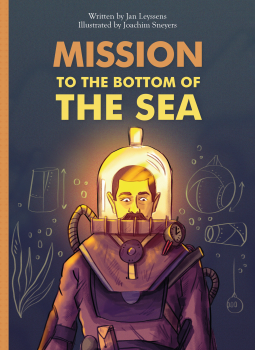 Going where no one has gone before has long been the pioneer's compulsion. William Beebe was a man who dreamed of exploring the ocean depths but was frustrated by the limitations of submarines of his day. So he advertised for someone to make a sub that could travel even deeper.

Enter Otis Barton who had the mechanical ability to pull off the task (provided he could be part of the expedition). Barton crafted a sub that barely fit two grown men, and then the pair proceeded to test it out in shallow waters, then deeper waters while unmanned and finally, the brave day when they descended further than anyone had before! With no camera to take pictures, they meticulously described what they saw and radioed the information back to the surface where illustrator Elise Bostelmann brought their descriptions to life.

Future explorers with the advantage of photographic equipment, were able to substantiate the findings that Beebe and Barton had witnessed years before. Young people today can go see the Bathysphere at the New York Aquarium.

This is a wonderful book demonstrating the rewards of persistence, dedication, and teamwork. I loved the illustrations and the fascinating look at two pioneers in underwater exploration.  Who knows what future scientist, or ecologist might be inspired by reading Mission to the Bottom of the Sea?  This book would be a fabulous addition to any school or STEM library.

For a bit more about these pioneers, the first four minutes of this film provides a mini-documentary about their work as well as a glimpse of more illustrations from their explorations.

Disclaimer: I received a free digital copy of Mission to the Bottom of the Sea from NetGalley for the purpose of review. No other compensation was received.
at January 22, 2020