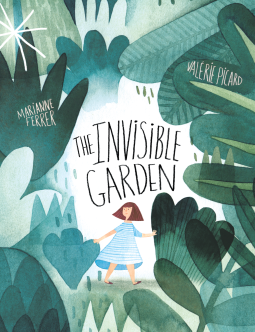 The Invisible Garden introduces the reader to Arianne, on her way to the country to celebrate her grandmother's birthday.  Being the only child present, she is soon encouraged to go explore the gardens outside where she lies down in boredom. She soon, however, gets wrapped up in observing the wonders of the natural world around her. In her imagination she soars off on a dandelion seed and gets a glimpse of grandeur and mystery of the universe.


The sparse text is mainly Arianne talking out loud to herself or to nature. I love that in her boredom, Arianne finds a spark of imagination that takes her outside her reality into a world of new discoveries. Perhaps a new maxim should be, "Boredom is the mother of imagination."  Children will be fascinated by Arianne who seems to shrink and get larger as she imagines herself interacting with the natural world.

The illustration style is not one I would normally gravitate toward but as a children's book, I think the simplistic people and interesting patterns and quirky details on each page will interest young audiences. The art is also one that a child could try to replicate on their own which could lead to all sorts of creative extensions to the story.

Disclaimer: I received a digital copy of The Invisible Garden from NetGalley for the purpose of review. No other compensation was received.
at January 07, 2019