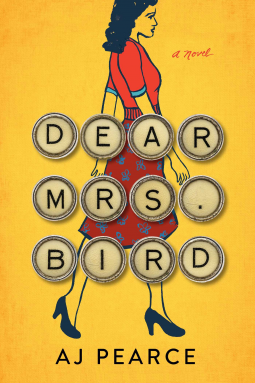 Spunky Emmy dreams of becoming a war correspondent. Living in London in 1940, she spends her days at work and her evenings manning the telephone for the Fire Brigade. When a newspaper posts an ad for a part-time position, Emmy knows her ship has come in!

Emmy secures the position but it isn't quite what she expected. In her excitement during the interview, she hadn't quite realized that she would be typing up replies for an advice column in a women's magazine. While not the journalistic dream she had hoped, Emmy does become interested in the lives of the women who write to Mrs. Henrietta Bird. So many broken hearts and difficulties faced by jilted girfriends or worried wives of enlisted men.  Unfortunately, Mrs. Bird, ever prim and proper, deams most topics Unacceptable and instructs Emmy to cut up any correspondence that relates to any number of off-limit topics.

Day by day as Emmy opens letter after letter of women needing help, she decides to smuggle home a letter to answer herself. That sets into motion a chain of events that lead to the threat of termination. On the personal front, Emmy has had her ups and downs with romance, strained friendships, while being a witness to unspeakable tragedy during the bombings in London.

Readers will love Emmy's enthusiasm and willingness to do her part for the war effort. Emmy meets each new challenge in her life with humor and aplomb. Author A. J. Pearce has created an endearing heroine that readers will adore. I hated to reach the last page and sincerely hope there will be a sequel!

Disclaimer: I received a free digital copy of Dear Mrs. Bird from NetGalley for the purpose of review. No other compensation was received.
at August 14, 2018