Book Review: Death Be Not Proud by C. F. Dunn 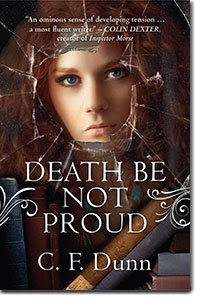 I have to say that C. F. Dunn knows how to craft a tale. Leaving many threads unsolved in the first book in the series, readers had little choice but to continue with the tale (or forever wonder how it concludes).   Having been frustrated with some of the moral implications in the first book, I had not planned to continue the series but the opportunity to review the second book nudged me over the edge.

The author included a helpful recap of the first book for those who read it and may have forgotten some details. I would not say, however, that it was enough information for someone starting with book two. Therefore, I would highly recommend beginning with the first book, Mortal Fire.

I'm not sure that I've read a series so riddled with mysteries. The second book seemed only to raise new questions while answering hardly any questions raised in either book. Upon her return to home following an attack on her life, Emma has her share of ups and downs--at times they seem almost like the erratic behavior of a hormonal teenager so I was beginning to doubt the maturity and sanity of Emma.


In possession of her ancestor's journal (a theft not dealt with in either the first or second books), Emma decides to use her time of recuperation to do some research on Matthew Lynnes. She discovers his origins but with no explanation of his apparent immortality, strength and almost supernatural protection from injury.

Somewhat predictably, Prince Charming finally phones and then even shows up in England. But it's not a social call; he's basically on a mission to bring her back to the US (somewhat forcefully). I have to say that his "drive" comes across as a bit controlling and part of me feels as though the reader is being asked to like a not-so-nice character (looks, mystery and money trump character, don't they?).  I think her parents are rightly concerned over his influence upon her.

On the journey home, they puzzle through the implications of what Emma has learned. Surprisingly, Matthew himself cannot explain fully the mysteries of his age, strength and other unique qualities.Then on top of all that, Emma learns another shocker about Matthew that challenges her perspective on their relationship.

Emma makes incidental references to being a Christian, but those claims ring rather hollow based on how she behaves (stealing university property, lying to her parents, etc.). In a frank discussion with a cohabitating friend, Emma states her firm conviction not to push the bounds of physical intimacy until marriage.  Yet only a few pages later, she has agreed to a secluded retreat to a mountain cabin with Matthew--a trip that a Christian would avoid to prevent even the appearance of wrong or at the very least not to blatantly put oneself in the path of temptation.

Once there, the reader is privy to Emma's private thoughts which don't exactly match the convictions she verbalized to her friend.  She actually seems put out that "nothing happens."

SPOILER ALERT:
Emma discovers that Matthew is not the widower she assumed.  In spite of that revelation, Emma accepts Matthew's gestures of affection (hugs and some kisses) all while being reassured by Matthew that his wife knows all about Emma.  Sort of suggests that if it's ok with wife #1 to start grooming wife #2, then small gestures of affection aren't "wrong."  Or perhaps the idea that anything short of full intimacy is not immoral? Matthew still intends to bring Emma home to "meet the family."  Honestly, the whole end of the book was nauseating to think they see nothing wrong with pursuing their future while waiting for his first wife to die.  In my mind, that is an emotionally adulterous relationship.  And there are also some shades of an unhealthy domination as well that borders on violent.

So yet again, the book leaves the reader hanging with not only more mystery but some very questionable moral implications.  I sincerely hope that Emma will snap out of her infatuation in the next book and begin acting more like the Christian she claims to be.
You can purchase a copy of Death Be Not Proud from the following retailers:
Kregel
Amazon
Christianbook.com
Barnes & Nobel

Disclaimer: I received Death Be Not Proud from Kregel Publications for the purpose of review. No other compensation was received.
at August 12, 2013