Sherlock Holmes and the Needle's Eye 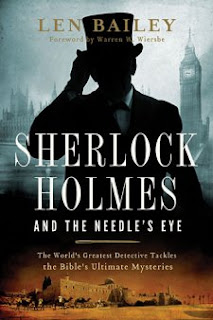 Len Bailey creates an interesting juxtaposition of an analytical--albeit fictional--character with the mysteries of Biblical scholarship.

When I first saw the book, I wasn't sure what to expect thinking it might read like a scholarly treatise from an academic journal. I was pleasantly surprised that Bailey had picked up the Holmes & Watson relationship so easily and framed his novel as a series of challenges set forth by an anonymous person to have Holmes investigate and try to explain ten unanswered questions from events in the Bible.

With the help of time travel (not explained fully so reader is left to imagine how the workings of their travel came about), Holmes (and usually Watson) get a first-hand glimpse of the characters from both Old and New Testaments and plausible explanations are given for topics that have puzzled Bible scholars.  I have to admit that some of the Biblical characters were new to me; but for characters that I knew about, the puzzling portions of Scripture were ones that I had never before given much thought.

It had been awhile since I'd read any Sherlock Holmes so it took me a bit to get into the time period and the style of Holmes' investigating. I think Bailey did an admirable job of making it "sound" like the great detective--including his very vocal opposition to Christianity.  One thing that surprised me was that for someone who does not exactly revere (and admitted to not having read much prior to the cases), Holmes was quoting the Bible quite prolifically by the end of the book.

Die hard Holmes fans may not be as impressed but for the casual fan who may have watched some old episodes of Holmes, this will be a refreshing set of "new" cases to explore.  I liked that Mrs. Hudson took on a bit more personality in Bailey's book than I had remembered.

The truly unique aspect of this book is the study guide for each chapter. It offers questions for the reader to consider and explore about each of the Bible figures used as part of the 10 mysteries.  Readers will look at the passages as well as look at the implications for the answers to those mysteries.

Bailey included a great deal of direct quotes and references to Holmes cases which were carefully noted in the back of the book.  Quite honestly, I gave up trying to go to the end of the book to read the source info as flipping back and forth interrupted the flow of the story too much.  In a future printing, I would highly recommend footnotes or at the very least notes at the end of the chapter itself.

This book would make an interesting gift for anyone who likes Holmes or anyone who is willing to look objectively at some Biblical mysteries.  In spite of seeing events first-hand (which you'd think would make a believer out of the greatest skeptic), Holmes remained unchanged spiritually.   Even though Holmes is fictional, I can't help wishing he would have "seen the light" at the book's conclusion.

Disclaimer: I received a free copy of this book for the purpose of review from Thomas Nelson's Book Sneeze program. No other compensation was received.
at June 21, 2013