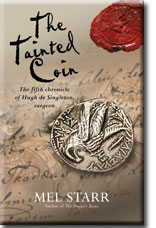 It is the autumn of 1367. Master Hugh is enjoying the peaceful life of Bampton when a badly beaten man is found under the porch of St. Andrew's Chapel. The dying man is a chapman--a traveling merchant. Before he is buried in the chapel grounds, an ancient, corroded coin is found in the man's mouth.

Master Hugh's quest for the chapman's assailants, and his search for the origin of the coin, begins to make progress--but there are men of wealth and power in league with his old nemesis, Sir Simon Trillowe, who wish to end his search . . . permanently.

But Master Hugh, and his assistant, the groom Arthur, are determined to uncover the thieves and murderers, and the source of the chapman's coin. They do, but not before they become involved with a kidnapped maiden, a tyrannical abbot, and a suffering monk--who needs Master Hugh's surgical skills and in return provides clues that assist Hugh in solving the mystery of the tainted coin.

A Series Worth Reading

The Tainted Coin was my first introduction to Hugh de Singleton and my first impression was outstanding. The book gives the reader a glimpse of not only medieval village life but also medical practices of the time period. Starr's years of teaching history and studying medieval surgery and English provided realistic detail and historical authenticity. While some of the vocabulary may be unfamiliar, Starr thoughtfully included a glossary for the reader's convenience.

The book begins with a hasty summons of Hugh to attend to a corpse. Having been beaten badly and dying with the cryptic words, "He didn't get me coin," Hugh's additional role as bailiff to Lord Gilbert sets him on the course to find the murderer. The author provided a very helpful map of the villages in the area so you can follow Hugh's travels.

The victim's life slowly unfolds as Hugh begins to investigate. Readers are introduced to a cast of memorable characters--many unsavory.  Told from Hugh's perspective, the reader is taken along on a winding and often perilous journey to the book's satisfying conclusion. Hugh is an entirely likeable and witty protagonist. Not without weaknesses but persistent in pursuing justice.

Although the book is the fifth about Hugh, I thoroughly enjoyed the tale on its own merits and look forward to reading Starr's previous books about the surgeon's adventures (references were made to them but not enough details given to spoil the reader's experience). I certainly hope that Starr will continue writing future installments about Hugh de Singleton.

I found the book to be a delight in every way and highly recommend it to others. If you'd like to have a taste of the tale, then download an excerpt from the book. You'll want to know how it ends!

It's worth noting that the book is printed on very nice, sturdy paper with a thicker than normal paperback cover. What was particularly notable was the cover is scored to protect the binding as well. The thicker cover also prevents the annoying curling that often happens to softcovers. The superior quality is important as this will be a book you'll want to read more than once!

You can purchase The Tainted Coin directly from Kregel Publications for $14.99 or purchase from one the following retailers:

Hurry! For a limited time, you can get the Kindle version for only $5!

You can learn more about author Mel Starr at his website.

Disclaimer: I received a free copy of The Tainted Coin from Kregel Publications for the purpose of review. No other compensation was received.
at January 21, 2013