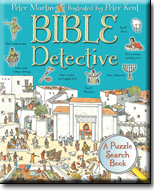 As well as events in the New Testament including Jesus' life/ministry and his disciples' ministries:
Things I loved

General Thoughts
In a market flooded with search and finds with TV connections or monster themes, I have to say that Bible Detective is a refreshing alternative. However, there were some disappointments.

The biggest disappointment was the use of the BCE/CE designation for dates. I suspect that in Europe this is the commonly accepted format. In the United States, however, Christians see this designation as an effort to remove historical references to Christ. So in a book titled "Bible Detective,"  the choice was rather surprising. In future US editions, I would strongly suggest the use of BC and AD.

I also felt there was an attitude of skepticism in the way the narrative was worded. Seemed to treat the Bible as literature instead of historical fact. References in the text such as the "story" of the people of Israel (not the history). Abraham "believed" God was telling him (rather than God told him as a matter of historical fact).

One notable theological error was on page 12 saying that the disciples "helped Jesus preach his message about what it means to live as friends of God."  That is not the essence of the Gospel and not at all an accurate depiction of Christ's message.  While I don't expect a search and find book to be doctrinally instructive, I certainly do not want it to be doctrinally misleading.  I would caution parents to better explain the mission of Jesus.

You can buy Bible Detective at the following retailers:

Disclaimer: I received Bible Detective free from Kregel Publications for the purpose of review. No other compensation was received. The opinions expressed are my own.
at November 12, 2012