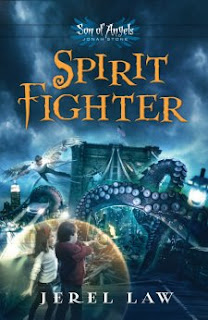 
“In his exciting debut novel, Jerel Law transports readers to a place where supernatural forces of good and evil collide. Young readers will be entertained and inspired by *Spirit Fighter. I heartily recommend it.*” —Robert Whitlow, bestselling author of the Tides of Truth series

What if Nephilim—the children of angels and men—still walked the earth? And their very presence put the entire world in danger? In Spirit Fighter, Jonah and Eliza Stone learn that their mother is a Nephilim and that they have special powers as quarter-angels. When their mom is kidnapped by fallen angels, they must use those powers to save her. Along the way, they discover that there is a very real and dangerous war going on between good and evil and that God has a big part for them to play in that war.

Parents today are looking for fiction that makes Christianity and the Bible exciting for their kids. This series is the Christian answer to Percy Jackson and the Olympians, The Kane Chronicles, The Secret Series and other middle-grade series packed with adventure, action, and supernatural fights. Son of Angels, Jonah Stone will be the first series in the market to explore this topic from a biblical perspective with content that is appropriate and exciting for middle-grade readers.

“Jerel Law has crafted a fantastic story that will leave every reader wanting more. Stop looking for the next great read in fantasy fiction for young readers—you’ve found it!” —Robert Liparulo, bestselling author of Dreamhouse Kings and The 13th Tribe

My Perspective
It is extremely challenging to find exciting, morally upright books for middle school students to read. The market of young adult fiction is riddled with witchcraft, vampires or the push to act out immoral behavior. Even in juvenile fiction, disrespect and/or rebellion toward authority seems the norm. Every time I visit the library hoping for something "fresh" it's just more of the same. Christian books are just not coming out fast enough for a voracious reader!

So when The Spirit Fighter came up for review, I was excited to read it. I have more than one middle schooler who enjoys Christian fantasy so I assumed this would be a hit with them as well  Actually both my son and daughter managed to read the book before I even cracked the cover. Both of them said it was ok but not that great.

When I did start the book, I have to admit to feeling a bit disappointed.  While the reading level is for 8-12 year olds, I would have to say that the theme of the book (spiritual warfare and presence of demonic spirits) is too mature for this target audience. I could see this book being a good fit for an older student who needs an easier read. The temptation, however, will be for younger kids to read (because they are able) and I don't think the spiritual topics were handled appropriately for such a young audience. Granted, the violence and characters are nothing compared to most of the garbage that passes for juvenile fiction these days but I'm not comparing this book to that. I was trying to look at the book on its own merits and I felt it really fell short in its development.

The main character is a pastor's kid and he discovers one day that he is actually part angel.  As Jonah's parents talk about his grandfather, a fallen angel, he seems to have a pretty weak knowledge of the topic. I would have assumed that growing up in a preacher's home, you'd have a better than average knowledge of the Bible.

The mom ends up being kidnapped and two of her kids (quarter angels) go off to try to rescue her.  There are a few angels mentioned but most of the "spiritual forces" the kids encounter are fallen angels. Their appearances are described in quite creepy detail.

For the very serious topic of spiritual warfare, I was surprised at how little Scripture was part of the story line. Yes, there was the reference to the armor of God and a few other obvious ones but the kids seemed to do most of their "work" in their own strength (aside from some "Help me, God" moments).  You would think that prayer as a weapon would be infused with Scripture and such prayers would unleash heavenly armies of angels who would also be battling the fallen angels.

I really wanted to like the book but unfortunately, I felt it lacked substance--sort of like milk for babes instead of real meat. If any sequels are done, I really hope the author develops the characters with a much greater reliance upon God's word for instruction and guidance.

I received a free copy of The Spirit Fighter from Thomas Nelson's Book Sneeze program for the purpose of review. I received no other compensation.