Across the Wide River by Stephanie Reed 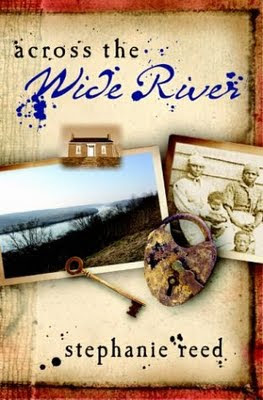 Lowry's father is a minister who isn't afraid to vocalize his opposition to slavery. Originally from Tennessee, his mother and father had decided to move to Ohio to live in a free state but on their journey, a Kansas church asked Mr. Rankin to be their pastor and they'd stayed. Then a young black boy who'd been coming to learn about the Bible was found by the pastor brutally beaten by a white man. That was enough to nudge the Rankins to move on to Ohio.

Once there, Rev. Rankin did something unusual: he built a huge house with three front doors! The townspeople wondered why a minister was so uppity thinking he needed such a big house. They didn't understand that Mr. Rankin had the foresight to supplement his meagre pastor's salary by renting out two portions of the huge house while they lived in the third part. But the Rankins were restless to do something more than just preach against slavery. They soon moved to the country where they became a part of the Underground Railroad. They relied on Lowry to assist in transporting runaway slaves to the next stop.

This wasn't always an easy task. Lowry would often lose a whole night's sleep and still have chores and school to attend. And if the fatigue weren't bad enough, he got tired of everyone assuming he would become a minister like his father. He summons up the nerve to ask to go live with his uncle and apprentice as a carpenter. At first, this seems like a good fit but he soon becomes restless again and falling under conviction, Lowry ends up enrolling in seminary after all.

And this is where the real battle of character and endurance begins. Lowry wasn't exactly received at the school with open arms. Thankfully he finds at least one faculty member who encourages him in his studies and his faith. This is a fascinating story not only of a young man's journey to manhood but an important documentary on a family helping slaves journey to freedom.

My Thoughts
When the book first arrived, I asked my daughter (11) if she wanted to read it first. She breezed right through it in a couple days and enjoyed it. I, too found it a great read and thoroughly enjoyed meeting the Rankin family and seeing how they worked together believing that the Lord would have them assist slaves to freedom. This was a family endeavor. Lowry helped with transportation but the whole family had to work together to keep the secret. One thing I really appreciated was that while the topic of the treatment of slaves was discussed, it was done so in a way that middle schoolers could handle (without overly graphic depictions of abuse). Having such a beautiful example of Christians acting in obedience to God and risking their lives is a great tool to talk with my children about this time in history. When they are older, they will undoubtedly will learn of the reality of just how cruelly slaves were beaten and abused. For now, Ms. Reed's book is an excellent introduction to this time in our nation's history.

You can learn more about the author, Stephanie Reed at her website. While you are there, read the first two chapters of Across the Wide River. You might also enjoy reading an interview with Stephanie here.

Visit other bloggers who reviewed this book at the Across the Wide River Blog Tour.

Disclaimer: I received a free copy of Across the Wide River from Kregel Publications for the purpose of review. No other compensation was received.
at August 19, 2011

Thank you, Jill! I like how you did your homework, digging up that interview.

I'm glad your daughter enjoyed the book, too. If you want to read the first two chapters of the sequel, The Light Across the River, you can find them here: http://bit.ly/rdRKvp This is the book where the Beecher and Stowe families are featured even more, plus the real-life slave who inspired Uncle Tom's Cabin and Eliza.

I so appreciate that you shared your blog readers with me. Thanks again!