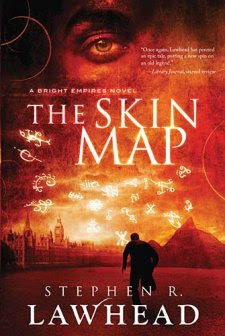 Book Description from the Publisher:

"I need your help with a project. It will be the adventure of a lifetime—of several lifetimes. But it will change you forever."

Kit Livingston's great-grandfather appears in a deserted alley during a tumultuous storm. He reveals an unbelievable story: ley lines throughout Britain are not merely the stuff of legend or the weekend hobby of deluded cranks—they're pathways to other worlds. To those who know how to use them, ley lines grant the ability to travel the multi-layered universe of which we ordinarily inhabit only a tiny part.

One explorer knew more than most. Braving every danger, he toured both time and space on voyages of heroic discovery. Ever on his guard, and fearful of becoming lost in the cosmos, he developed an intricate code—a roadmap of symbols—that he tattooed onto his own body. This Skin Map has since been lost in time. Now the race is on to recover all the pieces and discover its secrets.

My Thoughts:
I have to admit that when I started reading The Skin Map, I didn't care much for the main character Kit or his girlfriend Wilhelmina. Kit seemed like a careless, fly-by-the seat of his pants kind of guy and when he expressed the thought that "...he was once more impressed with the idea that he simply had to get a better girlfriend at first opportunity, " I liked him even less. Wilhelmina was also presented in a less than attractive way.
When Kit tries to explain his absence of 8 hours by saying he'd met his great-great-grandfather, travelling in time, Wilhelmina doesn't believe him. Kit takes her with him to the location where he had his mysterious encounter and they end up each being transported to different places. Kit then tries to get Cosimo to help him locate Wilhelmina--a task easier said than done and requiring the assistance of an unusual map.
The majority of the book skips back and forth between the separate realities they are living: Kit with his great-great-grandfather and one of Cosimo's colleagues and Wilhemina experiencing Prague in 1606. She providentially hitchhiked into Prague with a baker ready to set up shop. She immediately become his business partner. I thought her character had surprising pluck given the blase' introduction we had of her. Not sure if that contrast was intentional but I liked that she didn't follow the predictable path I had envisioned based on her lackluster introduction.
While Wilhelmina is making breakthroughs in the baking world and introducing coffee (slightly before its time), Kit is off trying to track down a portion of a map (the skin map) that has been stolen. The reader learns about "astral travel" along with Kit as Cosimo explains what he knows. Lawhead indicates that the idea of this traveling along what he calls "ley" lines (sort of lines that transcend time and space and one single reality) came from observing new-agers trying to capture energy fields. The book reminded me very much of a Doctor Who episode; sci-fi fans will enjoy the added dimension to the more typical time travel stories that deal with only one dimension.

The whole concept of a "skin map" was a bit creepy. And not being a fan of tattoos in general, I found the scene describing the tattoo process a bit distasteful. Honestly, the thought of someone having their skin made into parchment upon their death sounds like something from a horror flick. Beyond that rather macabre thought, the book definitely had suspense and adventure. My initial disappointment with the characters was transformed as their personalities emerged throughout the story. Of course just when things get exciting, the book comes to a crashing halt and the reader is left hanging and anxiously awaiting the next installment in the Bright Empires series. I know I'll definitely want to read it!

Book Information
The Skin Map can be purchased directly from Thomas Nelson in the following formats:
The book can also be purchased from one of the following retailers:
Other Reviews
Read reviews from other readers at Book Sneeze. You can also experience a taste of the adventure through the following book trailer (makes you wish it were a movie):

Disclaimer: I received a free copy of The Skin Map for the purpose of review through Thomas Nelson's Book Sneeze program. No other compensation was received.