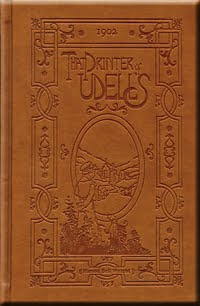 Our family is a fan of Lamplighter Publishing . The company has unearthed dozens of out-of-print books and reprinted them in beautiful hardbound books. Over the years, we have slowly added to our collection, buying new copies at Christmas, Dad's birthday, and Father's Day. My husband is the designated reader of Lamplighters in our home. Most of them we read as a family but there are a few titles we didn't think our kids were quite ready for. One of those that my husband and I just finished reading was That Printer of Udell's by Harold Bell Wright.
Although originally written in 1902 the book has surprising parallels to our society today. The main character, Dick Falkner, a boy raised by a godly mother and an alcoholic father, leaves home after his mother dies. Wandering from place to place he struggles to find employment. The book highlights the prejudice against "tramps." Dick, however, distinguishes himself by refusing handouts and looking for honest work to support himself. His struggles against his father's alcoholic legacy plague him on his journey where he often finds "friends" who readily offer to fuel his addiction.
With some printing experience, Dick finally finds work as a printer's assistant to George Udell. While Udell is not a Christian, he shows more compassion to Dick than any "church goer" he had previously approached. Both Dick and George Udell have been around so many Christians who do not live out their beliefs that neither one wants anything to do with the church. But with the example of a godly preacher and a zealous group of young people intent on putting their faith into practice, both Dick and George are given much to contemplate.
Woven within the story is the conflict among local clergy. One clergy in particular receives quite a bit of criticism for encouraging his congregation to love and serve as Jesus did. But certainly this doesn't apply to the wealthy class; they aren't expected to mingle with the lower classes are they? Dick finds himself at the center of quite a controversy on how to help the destitute. Having had personal experience he becomes an invaluable resource in crafting a system for homeless men to find meaningful work while earning their lodging.
The book left me with many things to consider. How often have I been unwilling to extend compassion to someone whom I thought "deserved" his lot in life? How often have I been unfeeling toward the temptations others may succumb to? Am I truly loving the "least of these" whom Jesus also came to save? Have I forgotten how much I myself have been forgiven?
This book really makes one grapple with how he will live out his faith and follow Christ completely. If a Lamplighter edition isn't in your budget, you can download a free copy from Google. Prepare to be challenged and inspired.
Blessings,
Jill